Paleo vs Keto: Which Diet is Best for Bodybuilding?

48 Hour Fast: Why Bodybuilders and Weightlifters Should Fast

Eating Big to Gain Muscle: My Personal Story as a Hardgainer

How to Build Muscle Mass on a Vegan Diet

Growing up in the 80’s and following professional bodybuilders from that era, we were taught that to gain muscle mass, you had to eat meat. And a lot of it!

However, I’ve seen a trend of more and more athletes, including bodybuilders, switching over to a vegan diet.

After doing my own research, and experimenting on my own, I’m going to share what I’ve learned and show you how you can build muscle on a vegan diet.

You’ll also learn the pros, cons, and truths of the vegan diet. And I’ll give you a 10-week plan to transition to vegan that may be more feasible than doing an immediate switch. Of course, if that’s what you choose to do.

**Before you dive into this post, there are a few points of transparency that I need to make…

**If you’re looking for other types of meal plans that include meat, check out my posts below:

Can You Really Build Muscle Mass on a Vegan Diet?

Eating meat has been a primary source of protein for bodybuilders for decades. Second to meat is dairy (including whey protein), which is something else that’s not on the vegan menu.

It makes sense because you can get much more protein from a slab of beef than you can with tofu or legumes. And whey protein is even more convenient. Blend up some whey protein powder with peanut butter, fruit, and milk, and you’ve got the perfect mass building shake.

So it’s easy to understand why meat and dairy have been go-to sources for mass building. And let’s be clear – going without meat and whey protein shakes can present some challenges when you’re goal is to gain muscle size.

That’s okay…I’ll cover all of this. I’m also going to give you some vegan food options that may be just as effective at maintaining your energy levels in the gym and packing on size.

What About Protein on a Vegan Diet?

Despite what anyone may tell you, you do need protein to build muscle. Especially if you’re looking to gain muscle mass.

Vegan or not, protein is a must for muscle gain.

If you’re like me, the first time you heard the word ‘vegan’ you probably thought that there’s no way you can get the protein you need for building muscle mass. So naturally, it’s easy for us to walk away without considering a vegan diet for bodybuilding.

Fortunately, there are plenty of plant-based foods that will give you the protein you need for building muscle. Charlotte Pointing explains this further in her article ‘How to Vegans Build Muscle With Plant-Based Food?‘ (on LiveKindly.co website).

The problem is our mindset and only knowing what we’ve been taught. In the world of bodybuilding, we’ve been ‘fed’ that you need to eat meat-based foods to build muscle. Most of us were not taught that there was another option that may be just as effective.

List of Vegan Foods for Bodybuilders and Strength Athletes

When you think of bodybuilding, powerlifting, strongman, or any type of athletic sport that requires strength and stamina, you have to think about food differently than normal people.

Food is all about optimizing 3 things for you:

Here’s a list of vegan-friendly foods that are high in protein. The second and third columns will tell you approximately how many grams of protein per serving.
**This data was gathered from Jessica Gavin’s article ‘Vegan Protein Sources.’

Of course, there are more vegan foods; these are some of the prime sources that fit the needs of bodybuilders and strength athletes. And these foods have higher protein per serving.

You can also take vegan-based protein powder for extra protein. It’s the same concept as bodybuilders on a meat-based diet drinking whey protein shakes to get extra protein.

**One of the top-selling vegan protein powders on Amazon is Orgain Organic Protein Powder.

There are some pretty awesome benefits to going vegan. You’ll find that many of the reasons people may switch to this diet is beyond just building muscle mass; it’s for optimizing health and reducing certain risks.

**After reading the below, I’ll also list some of the drawbacks of the vegan diet – remember, there are always 2 sides to every coin. It’s best to see both sides.

Some of the reasons may resonate with you while others may not. And that’s okay. I encourage you to also do your own research to see if this type of diet can fit your needs.

Obviously being healthy is a necessity for bodybuilders (and that is sometimes neglected over the desire to gain more size).

Mike Mahler explains his reasons for becoming a vegan, and how he’s benefited from this as a bodybuilder in his article ‘Getting Big and Strong on a Vegan Diet‘ on bodybuilding.com.

Potential Drawbacks of the Vegan Diet

Like anything in life, no matter how much you want to be an advocate for something there are always downsides. On that note, I say don’t be a zealot!

The goal with the vegan diet is to understand what the potential drawbacks are, and correct them. Or do something that will act as a substitute, and I’ll also give you some easy remedies for that below.

Here are some of the downsides to the vegan plant-based diet:

There are things you can do to offset these potential negative effects in regards to vitamin and nutrient deficiencies:

If you’re basing your nutrition solely on activism, political views, or religious convictions, you could very well be putting your health at risk. I know that statement is controversial, but make sure you’re diet is based on the right reasons…

Make sure you’re basing it solely on your health, performance, and how it makes you feel. Be honest with yourself. The article ‘The Pros and Cons of Going Vegan‘ expands on this on the Self website.

You may be on the fence about going completely vegan. And I totally understand that.

But if you’ve made it this far in the article, and are not already a vegan, I assume that you’ve been wanting to make some changes in your diet.

You may not choose to jump headfirst into veganism. Rather, you may go for a vegetarian bodybuilding diet instead. This will still eliminate the negative effects that come from eating foods like red meat and pork.

A vegetarian diet may be more sustainable than vegan. It can also serve as a way to gradually transition into a vegan diet. Like that movie ‘What About Bob?’ – baby steps are sometimes more feasible.

Another option is you may decide to simply start eating less meat. You could do something like having 1-2 meals a week with red meat. Then after a few weeks reduce that to once or twice a month. And go from there.

Regardless of what you choose, always assess how you feel and how your body is responding to your diet. Be honest with yourself.

Here are some practical steps to take if you’re thinking about transitioning to a bodybuilding vegan diet:

You may decide at this point if the vegan diet is for you. Or you may not.

Instead, you may decide to just cut certain foods out of your diet, and reduce others. An example would be cutting all meat but still keeping eggs, cheese, and whey protein as part of your diet.

The one thing I will encourage you to do is to make sure the foods you buy, vegan or not, are from pure, organic sources. Do some research on the companies that are manufacturing your foods, their farming process, and overall standards.

That’s not only important from an ethical stance, but also for your health. You don’t want to be putting crap into your body, especially if your goal is to build muscle mass.

Is Vegan the Best Diet for Bodybuilding?

As I mentioned in the beginning, my goal is not to convince you to become a vegan, or to not become one. I ‘strongly’ encourage you to do your own research, and you should also talk to your doctor before making drastic changes to your diet.

The goal of this post is simply to cover the fact that you can build muscle and even pack on muscle mass on a vegan diet.

***Just know that it may be a little more work involved as any new diet will require a period of adjustment and patience.

Now, is going vegan the best way to build muscle for bodybuilding?

In my personal opinion, no. And if you’re a vegan you’re probably cursing me right now. Let me explain…

You’re more than likely going to build muscle much faster on meat and dairy-based diets. The bottom line is you’re going to get more of the type of protein your body needs for building muscle with these foods.

And be cautious listening to bodybuilders and athletes that have recently switched to a vegan diet. Most of these people built their physique and have gotten to where they are on a meat-based diet.

Andres Vargas talks more about this and other myths in his article ‘Will Veganism Kill Your Gains?‘ on Layne Norton’s website.

What you have to think about is the long-term impact of eating the amount of meat it takes to pack on mass. What toll is that taking on your health?

On that note, I believe that over a longer period of time with consistent training, you can indeed build just as much muscle as a vegan than a non-vegan. And we all should be in this for the long-haul anyway, not just for short-term gains.

At the end of the day, it’s simply a choice you make. Just make sure it’s for the right reasons and not because everyone else is doing it, or because some social media influencer influenced you (no pun intended).

Again, you’ll need to be patient. And I can’t say this enough, be consistent with both your training and whatever diet you choose.

**As I mentioned earlier, if you choose the vegan route you should definitely try the Orgain Organic Plant-Based protein powder. This mixes well with almond milk and fruit, making it a perfect post-workout shake.

Hi, I'm Jason Stallworth and I created The Muscle Program in 2010 for the purpose of helping you build muscle. I know first-hand how weight training and being in the gym has shaped my life in more way than one. And here is where I share that experience with you so that you can continue pushing yourself and becoming the best version of yourself each day! 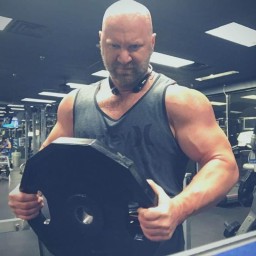